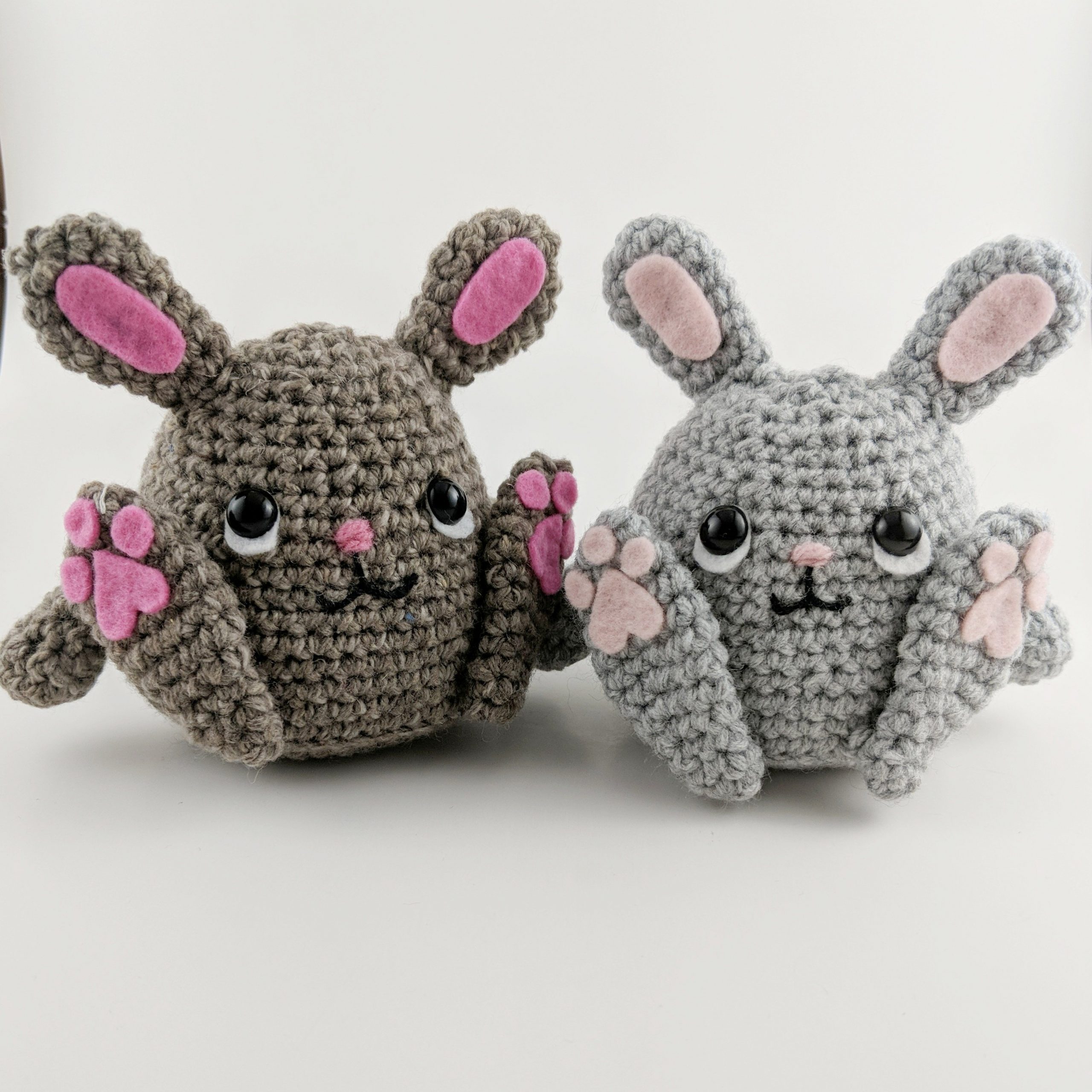 Spring is definitely here, folks! Thank. Goodness. I’ve never cared much for winter.. in fact I can safely say that I hate it. Every year I’m the sour puss during winter because it’s just so dang cold. That being said, I greet spring every year with a GIANT welcome sign and bid winter a not-so-fond adieu. I wanted to come up with an amigurumi to celebrate spring. My brain immediately spat out “bunny, but make ’em chunky.” And thus, Roly-Poly Bunny was born!

I know we’ve all been trapped inside both keeping ourselves and others safe this year, but my hope is that this little amigurumi bunny pattern will cheer you up!

I’ve included photos at the bottom of this post to help you assemble your Roly-Poly bunny. Enjoy!

Gauge is not terribly important here as long as you are producing a nice, tight fabric so that the polifil/beads won’t pop through your stitches.

This pattern is written using US terminology.

Pattern is made in continuous rounds rather than joined.

Please note that I crochet left-handed and my photo guides may reflect this. If you crochet right-handed (with your hook in your right hand), all the stitches are the same and will look the same, you will simply be working in the opposite direction as I am.

Please do not copy or sell my pattern in any way. You are welcome to sell finished objects made using my pattern. I only ask for you to credit me so that other makers can find my patterns as well.

Here is where you’ll place the eyes and create the face. See bottom of page for photo tutorial, “Making the Face”.

At this point, begin stuffing bunny. First pour in some poly-beads, approximately 1/4″ deep, then stuff the rest of the body with poly fil.

Thread yarn needle and pass through remaining stitches, pull tight to close. Fasten off and weave in ends.

Thread yarn needle and pass through remaining stitches, pull tight to close. Fasten off and leave tail for attachment.

Make a sl st into next st and fasten off, leaving a tail for attachment.

Make a sl st into next st and fasten off, leaving a tail for attachment.

Cut felt pieces for feet and ears, and either glue or sew on. See “Felt” Section. Sew ears on, I sewed mine starting Row 22 and ended at row 25. For the feet, the skinnier ends are the bottoms of the feet and should face downwards, the wider ends are the tops of the feet. Sew feet on front of body at an angle. Start sewing feet from the bottom, and leave the tops of the feet free. See “Feet” Section below. Sew front legs on sides of body, at approx. row 15. Create pom-pom in pom-pom maker or use pre-made pom, sew or glue on.

When you are happy with how the eyes look, place them back on your bunny and place the washers on the backs of the eyes.

For the bunny feet, cut felt pieces and place as shown above; you’re making two hearts and six small circles. Sew or glue in place in the above configuration.

Using either the pom-pom you made with your pom-pom maker (I used Clover’s pom-pom makers) – or the smaller pom-poms such as above from Michael’s, either sew or hot glue your bunny tail to your bunny. I added mine around rows 11-12 of the bunny body.

I hope you love this roly-poly bunny pattern. Please let me know what you think!

In love with this Roly-Poly Bunny pattern? Check out my Roly-Poly Winter Gnome pattern – Click HERE!

Pierogi have always been a huge part of my life. At every holiday or…

I’ve always been a bit reluctant to put up holiday decorations. It…

We use cookies on our website to give you the most relevant experience by remembering your preferences and repeat visits. By clicking “Accept”, you consent to the use of ALL the cookies.
Do not sell my personal information.
Cookie SettingsAccept
Manage consent

This website uses cookies to improve your experience while you navigate through the website. Out of these, the cookies that are categorized as necessary are stored on your browser as they are essential for the working of basic functionalities of the website. We also use third-party cookies that help us analyze and understand how you use this website. These cookies will be stored in your browser only with your consent. You also have the option to opt-out of these cookies. But opting out of some of these cookies may affect your browsing experience.
Necessary Always Enabled
Necessary cookies are absolutely essential for the website to function properly. These cookies ensure basic functionalities and security features of the website, anonymously.
Functional
Functional cookies help to perform certain functionalities like sharing the content of the website on social media platforms, collect feedbacks, and other third-party features.
Performance
Performance cookies are used to understand and analyze the key performance indexes of the website which helps in delivering a better user experience for the visitors.
Analytics
Analytical cookies are used to understand how visitors interact with the website. These cookies help provide information on metrics the number of visitors, bounce rate, traffic source, etc.
Advertisement
Advertisement cookies are used to provide visitors with relevant ads and marketing campaigns. These cookies track visitors across websites and collect information to provide customized ads.
Others
Other uncategorized cookies are those that are being analyzed and have not been classified into a category as yet.
SAVE & ACCEPT
Powered by